Cephalopods, a class of marine molluscs are what scientists classify octopuses, squid, cuttlefish and nautiluses. There are around 800 living cephalopod species contained in two groups: Nautiloidea which includes Nautilus and Allonautilus, and Coleoidea which includes octopuses, squid, cuttlefish and their relatives. Cephalopods are extraordinary molluscs and are the most intelligent and complex invertebrates. They have well developed senses, large brains, highly evolved eyes and astonishing camouflage. Cephalopods have adapted to occupy multiple habitats in the marine environment, from shallow shelf seas to benthic abyssal plains, from the tropics to polar regions and are the most diverse molluscs. The diversity among groups can be so great that it is difficult to establish which groups are most closely related (Allcock 2015). Cephalopods have a short life span. They mature quickly and rarely live for more than two years (Mather and Kuba 2009).

A series of truly fortunate events had to have occurred in order for an individual to become a fossil. The fossil record of early cephalopods is extremely rich as all cephs prior to coleoids had an external calcium carbonate shell (Kroger et al 2011.). However the fossil record remains far from complete, mainly because there are only a few recent fossils. The main problem science of palaeontology faces regarding cephalopod evolution is deciding what is, and what is not, a cephalopod. It is suggesed that stem cephalopods were present in the early Cambrian (541 to 485 million years ago (mya). Exactly which fossils represent stem cephalopods is still up for debate, but it is assumed that the earliest cephalopod fossil is Plectronoceras cambria (Kroger et al 2011). 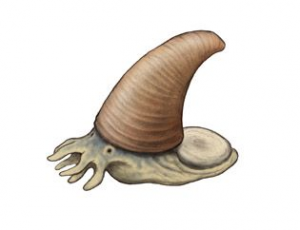 Molecular data estimate the divergence time of subclasses that have recent representatives, Nautiloidea and Coleoidea and places it in the mid-Palaeozoic (cca. 440 mya). In contrast to nautiloids, the coleoids diverged substantially in the Permian – 298 to 252 mya (Kroger et al. 2011).  Further divergence then occurred throughout the Jurassic (201-145 mya) and Cretaceous (145-66), resulting in the variety of forms present in the ocean today. 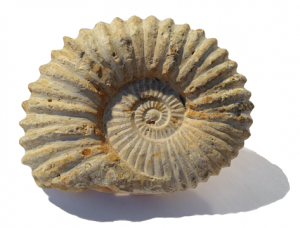 Ammonites, which are more closely related to living coleoids than to nautiloids, are very popular with both amateur and professional palaeontologists. They were wiped out at the Cretaceous Tertiary boundary (cca. 66 mya). Credit: Masur

Only a few nautiloid species are extant today, although there is no consensus on the number. Nautiloids are considered to be living fossils as their shell morphology has not changed since the late Carboniferous and they display many ancestral traits such as an external chambered shell (Teichert & Matsumoto 2010).

Extant nautiloids are found in two genera Nautilus and Allonautilus. The species found in these genera are distinguished by many characteristics such as differences in gill structure and the male reproductive system (Saunders 1987). 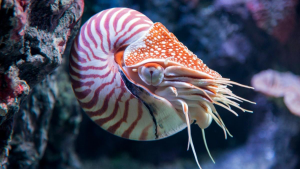 Unlike its extant sister group Nautiloidea, whose members have a rigid outer shell for protection, the coleoids have at most an internal cuttlebone, gladius or shell that is used for buoyancy or support. Some species have lost their internal skeleton completely (Roper et al. 1984)

2.1) Decapodiformes (squids, cuttlefishes and their relatives)

The feature that distinguishes decapodiforms from the octopodiforms is the modification of the fourth pair of arms into tentacles.

These can be either long and used as a fishing line or short and muscular.  The latter can be for the purposes of feeding quickly extended and then completely retracted (source; TimeTree). 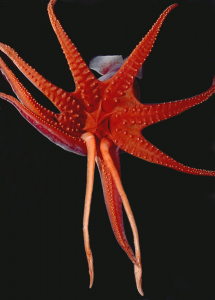 There are approximately 300 species of Octopodiformes contained within two groups, Octopoda and Vampyromorpha. All but one species is contained in Octopoda, with Vampyromorpha containing just one species Vampyroteuthis infernalis (more commonly known as the vampire squid). 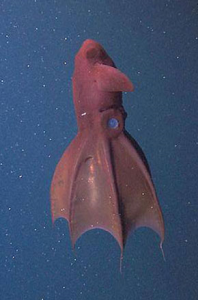 Octopoda is then divided into two suborders Cirrata and Incirrata. Cirrata have large fins and are more commonly known as the “finned octopods”. Incirrata contains the benthic octopuses which can be found in shallow waters or the deep-sea and also pelagic species (Source: TimeTree). 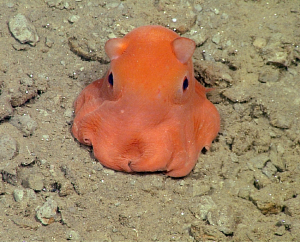 FUN FACTS AKA DID YOU KNOW?

Allcock L, A. Lindgren & J. M. Strugnell (2014). The contribution of molecular data to our understanding of cephalopod evolution and systematics: a review, Journal of Natural History