I am a PhD candidate in the School of Natural Sciences at NUIG and am a Dr Tony Ryan Research Fellow. I have always wanted to be a marine biologist ever since I can remember, from the first time I watched David Attenborough’s Blue Planet. My love of cephalopods stemmed from my work with Dr Louise Allcock during internships and research assistant positions and the more I learnt about these fascinating animals the more I wanted to learn. 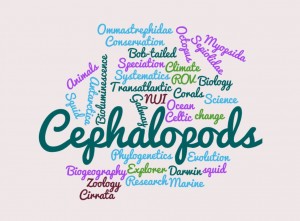 Several groups of the 800 living cephalopod species have undergone extensive radiations due to their rapid response to drivers of evolution and different adaption strategies such as broadcast spawning. I aim to study the evolutionary radiations of four groups of cephalopods, the families Sepiolidae and Ommastrephidae, and the orders Myopsida and Cirrata, and how their evolutionary relationships have changed over time.

·        Family Sepiolida: the bob-tailed squids. These are small colourful squids that live close to the seafloor in mostly shallow tropical seas of the Indo West Pacific. Although all closely related, there are three groups – two of which is benthic, one of which is benthopelagic or pelagic.

·         Family Ommastrephidae: a commercially important family of oceanic squids that has a world-wide distribution and potentially (because of their pelagic life-style in the open ocean) have faced fewer barriers to dispersal.

·         Order Cirrata: a group of mostly deep-sea demersal and pelagic octopuses known from at least the late Cretaceous, associated mainly with continental slopes, some species of which are currently heavily impacted by deep-sea fishing.

·         Order Myopsida: a group of commercially exploited coastal shelf squid which have likely faced greater barriers to dispersal, containing at least one genus whose distribution is indicative of a tethyan relic.

I am a MSc Zoology student at the Martin Ryan Institute, Department of Zoology, National University of Ireland, Galway. I have been research driven from the very early stages of my life, which has been a real adventure so far – from spending hours at a time searching for lizards and snakes, studying honeybees and spiders, to reading works written by world’s brightest minds . . . Eternity is what humans strive for and what better way to leave something behind than to make discoveries no other person on Earth has ever made before. After all, you never know what you’ll find out there! 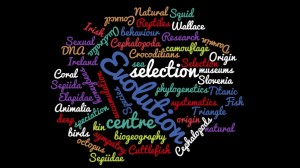 During my MSc I intend to focus on evolution of cuttlefishes, family Sepiidae*, and their radiation through the Indo-West Pacific. I will be paying closer attention to evolutionary relationships within the family, combining both molecular genetic and morphological data. In humans, it is usually the case that if you don’t know your past you don’t know your future. As an evolutionary biologist, I am “obliged” to find out more about the evolution of these unique animals that can easily equal tigers, lions or whales when it comes to their charisma.

More detailed insight into their evolution might also explain their unique distribution patters. There are more than 100 species of cuttlefish AND approx. 80-90 % of these are endemic to the region known as the Coral Triangle. This area, apptly called “the Amazon of the seas” because of its unpararalel marine biodiversity, is one of the most interesting places globally to study evolution. There are a few competing theories as to why the area is biodiverse, and more data needs to be gathered in order to understand fully understand the patterns that shape biodiversity.

Also, cuttlefishes are an important food source for a variety of different marine mammals, seabirds and fish. They are also harvested in large numbers by humans. In other words, they play a crucial role in the ecosystem, so understanding the impact of climate change on this group will also help to understand the likely ecosystem effects in this region.

* Sepiidae are perhaps best known for their remarkable camouflage, awesome vision and spectacular behaviour.  The genus Sepia has the widest distribution of all the sepiid genera – they can be found off the coasts of Europe, Asia, Africa, and Australia but are absent from the Americas. Sepiids prefer shallow coastal waters and are thus relatively easy to study.

My research is funded by the Irish Research Council.

You can find more about my previous and current research here: