Many people have suggested studying the deep-sea floor is more technically challenging than studying the moon. The pressure is immense, saltwater plays havoc with electronics – but with the right gear, you can learn a lot.

I am far away from Galway, on board the British Antarctic Survey research ship James Clark Ross, just south of the South Orkney islands.  We are studying the ocean floor in the only Antarctic Marine Protected Area. Although there are charts of every inch of sea floor in the world, in many places, they aren’t terribly accurate. So, the first thing we do is ‘swath’. The swath system is a jazzy echo sounder, sending sound beams down to the sea floor and recording the time the echo takes to bounce back to the ship from the sea floor. Each ‘ping’ from the sounder shows the depth of the ocean floor in a swath about 10 km wide (5 km either side of the ship) and, as the ship moves forward, a picture of the ocean floor topology slowly builds up. 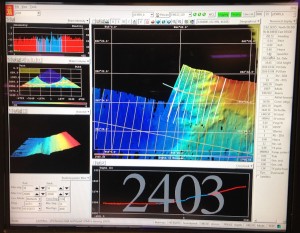 The swath system gives us really accurate depth information and shows us where might be interesting and safe to deploy other gear. Our towed gears need reasonably flat ground or they get stuck on the bottom and there is a risk of losing them. They are also deliberately tiny to minimize the amount of stuff collected, which makes them rather more vulnerable than the sorts of towed gear used by fishermen. To give you an idea of how small our towed gear is, the smallest ‘trawl’, the Rauschert dredge, can be lifted by a middle-aged woman whose broken ribs have only recently healed (that’s me!). 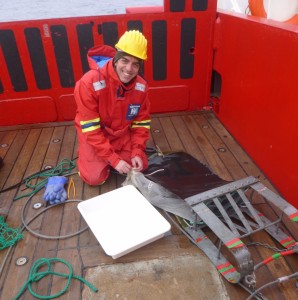 Claudio about to empty the bag of the Rauschert dredge, on the deck of the James Clark Ross, Antarctica

But before we deploy our towed gear, we use a camera system to look at the sea bed. This a low light camera, in a special pressure resistant housing, on a tripod frame (made of titanium so that it is light and doesn’t rust) with attached LED lights. It is connected to the ship by a specially strengthened fibre optic cable and sends live pictures of the sea floor back to the instrumentation room. The computer that drives modern ships can hold the ship in an exact position (using thrusters) allowing us to winch the camera tripod down onto the ocean floor and take a high quality still image. We then winch the camera up a few metres clear of the bottom, move the ship 10 m, winch the camera down again and take another picture. We can cover quite large areas this way and get a very good idea of the animals living on the Antarctic sea floor.

Two images from the drop down camera. Left, crinoids on a rock.  Right, a shrimp and an urchin.

There are some limitations to a camera system though: you can’t always identify animals from a picture; you don’t photograph animals that move fast; and you don’t see animals that are very small. That’s where our towed gear comes in. We use two ‘trawls’ – the Agassiz (named after the famous French marine biologist Louis Agassiz), and the Rauschert dredge (named after Martin Rauschert, a German amphipod specialist who developed it) – and one sled, the epibenthic sled.

Antarctic amphipods collected with our towed gear around the South Orkney Islands. Photos by Cath Waller.

Video clip from the camera on the front of the epibenthic sled, showing the Antarctic seafloor at approximately 1500 m depth. Taken aboard RRS James Clark Ross, March 2016, as part of JR15005 #SOAntEco

2 thoughts on “A peek at the ocean floor in Antarctica”