Although popular science often suggests that the deep sea is full of the weird and the wonderful, many of the animals that live there are very similar to their shallow water counterparts. Actually, with six weeks of first year zoology behind them, I reckon that most NUI Galway 1st year science students, and certainly our 2nd year zoology students, could at least identify most of the beasties we catch to phylum, and possibly class. 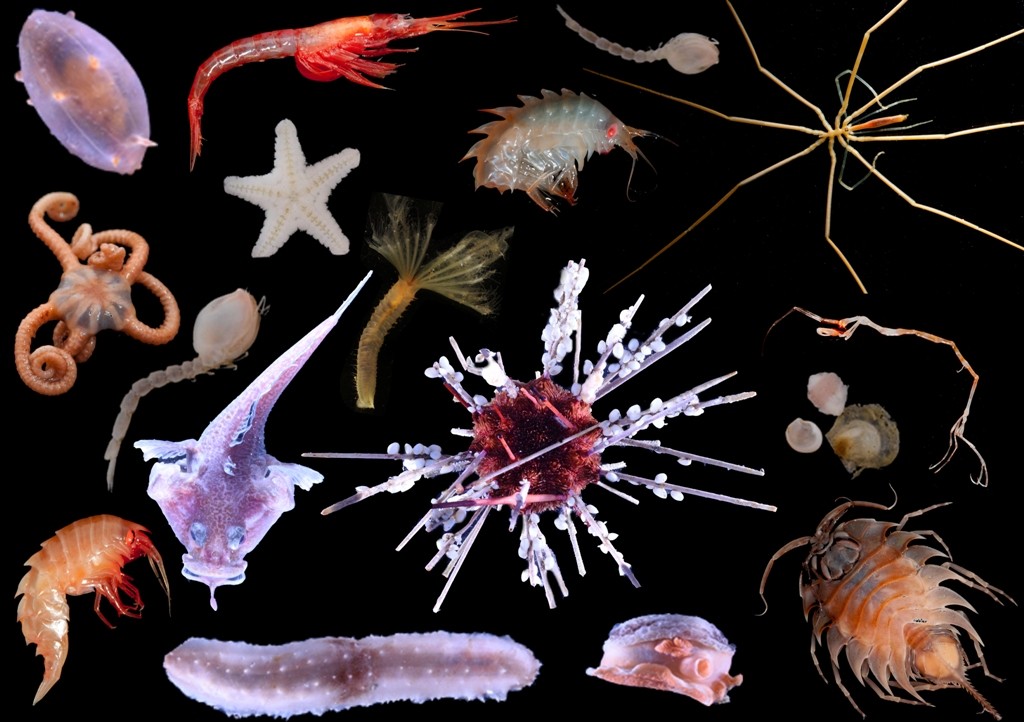 But occasionally, we get something a little more unusual, and we are always excited by rare creatures, which we might only know from photographs or from the scientific literature. We have had two notable ‘finds’ on our current Antarctic Expedition.

The Wonderful: Monocaulus parvula
The first was not hard to identify as a solitary hydroid (not least because I have seen a similar species before in the NE Atlantic), but solitary hydroids this big are fairly rare. They are actually incredibly similar in shape and form to their shallow water counterparts, but they are sometimes so large in comparison that they are remarkably often misidentified as different animals altogether.

Hydroids are animals in the class Hydrozoa, Phylum Cnidaria. Cnidaria is the group that contains jelly fish and anemones, and you can probably see the similarity. Although they occur in clusters in shallow waters, hydroids are often solitary in deep waters. They use their long tentacles to trap small particles of food, and maybe they are solitary because their size means they need a larger area for filter feeding. Interestingly though, the hydroids we found in Antarctica were solitary but frequent, as can be seen on this short video clip from the camera attached to the epibenthic sled.

The Weird: Alcyonidium pelageosphaera
Many of the difficult to identify animals are small and blobby. The animal below is no exception! But there are clues to its identity. Firstly, it appears to be made up of lots of similar small structures, rather than be a large animal with a head, mouth, digestive tract etc. This suggests that it is a ‘colonial’ animal – with each of the repeating units being one whole animal or ‘zooid’. This immediately narrows down the identification, and excludes all the animal groups in the montage photo at the top of this post. 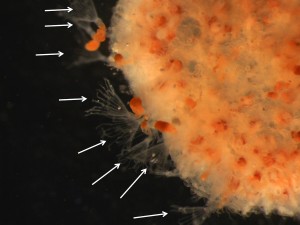 Our first difficult to identify animal: it appears to be a colony and each individual animal appears to have a crown of feeding tentacles (marked with arrows). Photo taken down microscope. The whole ‘blob’ (only half of which is visible) is less than 1 cm across.

The next obvious feature is the crown of feeding tentacles. These crowns are known as ‘lophophores’ and only a few animal groups feed using this method. At this point, we were pretty sure we were looking at an animal in the phylum Bryozoa. These animals are more commonly known as ‘sea mosses’ and, if you live by the sea, or have walked along the beach at low tide when the large kelps are exposed, you may have noticed a white lace-like encrustation on the seaweed fronds. This is a colony of bryozoan zoids. 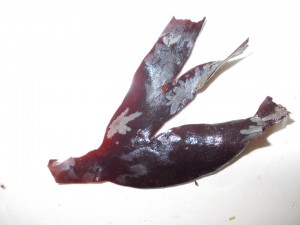 Hmm. Our deep-sea animal is not much like its shallow water counterpart… In fact, we were looking at the only known bryozoan that floats free in the ocean. A rare treat indeed! 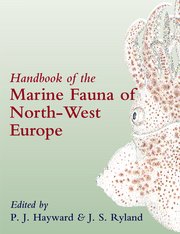 A big shout out to Pete Hayward for the identification of Alcyonidium pelageosphaera. I understand a new edition of his wonderful book will hit the shelves soon. (Yours truly updated the cephalopod section!).