I spent St Patrick’s day far from Galway: I am still in Antarctica on board the British Antarctic Survey research vessel RRS James Clark Ross.  One of my (many!) jobs on board is to identify any octopuses.  Octopuses are some of the coolest animals in the Southern Ocean. Apart from being cute, they reveal fascinating information about Antarctica, its history, and its connection with other oceans.

When I first visited Antarctica in the 1990s, there were only a handful of described species of octopuses. I worked alongside scientists who were doing important fish stock assessments for CCAMLR (pronounced ‘cam-lah’) – the Commission for the Conservation of Antarctic Marine Living Resources. CCAMLR regulates all commercial fishing activities in the Southern Ocean and their research surveys catch not only fish, but also octopuses. It soon became apparent that there was a large number of different octopus species in the Antarctic. This begs the question as to why? 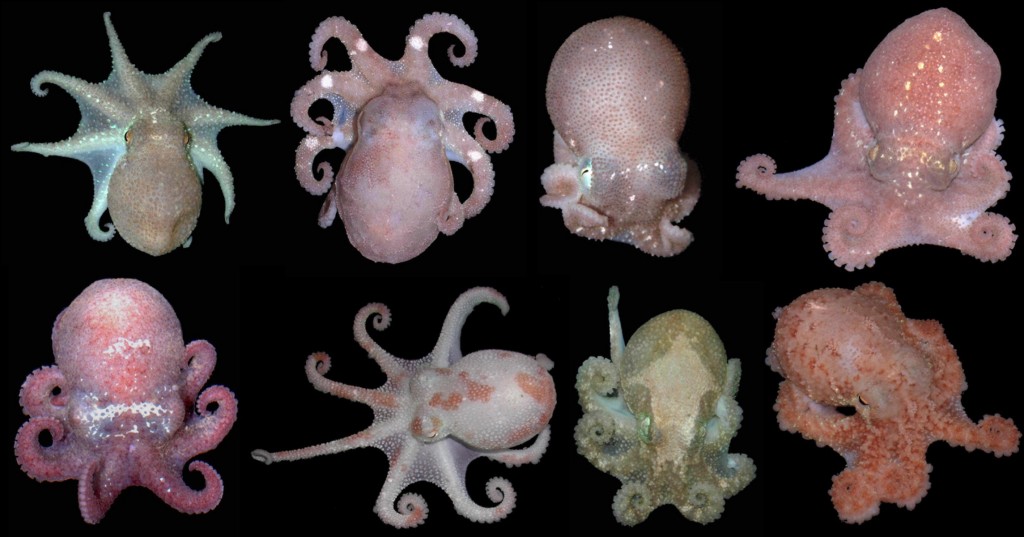 Top answer: because of glaciation cycles. Every 40,000 years or so there is a ‘glacial maximum’ – a period when the ice coverage is greatest, glaciers extend far out to sea, and sea ice covers much of the Southern Ocean. Within this ice coverage, small areas of open ocean – polynyas – persist. These are likely the only areas where seafloor animals survive – simply because all the food that reaches the seafloor derives originally from photosynthesis by plankton in the surface layers of water. If the ocean surface is covered by thick layers of ice, no sunlight penetrates, and there is no photosynthesis and no food chain. So, at a glacial maximum, small pockets of life survive in polynyas, isolated from other small pockets of life. Genetic drift leads to these populations gaining their own slightly different characteristics, and, by the time the ice melts, and the populations slowly expand until they come back into contact with one another, maybe the animals from the different polynas are different enough to no longer be able to interbreed. In other words, they have become distinct species. This ‘Antarctic diversity pump’ explains the very high number of species found in the Southern Ocean.

Interestingly, the Southern Ocean appears to have influenced the fauna of other oceans too. In the depths of the world’s oceans, octopuses are found that are remarkably similar to Antarctic octopuses, and very different from shallow water and tropical octopuses. The recently discovered ‘Casper’ from deep water off Hawaii is an example.

Research sequencing the DNA of Antarctic octopuses and their deep-water relatives has shown that the deep-water species had their origins in Antarctica. Around 15 million years ago, when the ice sheets in Antarctica dramatically expanded, the global ocean circulation changed such that there was a much greater flow of icy Antarctic bottom water out of the Southern Ocean into the other oceans of the world. This allowed relatives of the Antarctic octopuses to spread northwards into the Atlantic, Pacific and Indian oceans. The evolutionary origins of Casper are undoubtedly in the Southern Ocean.

But there is one octopus species in the Antarctic that seems to have migrated in the other direction. Benthoctopus rigbyae, is more closely related to the giant Pacific octopus found in the Puget Sound, Enteroctopus dofleini, than it is to other Antarctic octopuses. There are similar octopuses on the Patagonian shelf and shelf edge at the tip of South America, and likely this little octopus came to Antarctica that way. 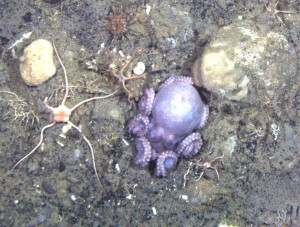 If you missed all the excitement about the discovery of ‘Casper’ by the Okeanos Explorer team, you can read about it in this excellent blog post by Mike Vecchione.